Ruby Slippers Theatre announces the launch of The Flying Monkey vlog for the 2020/21 Season with the Theatre in Multiculture: Perspectives series, featuring video interviews with BIPOC artists in the Canadian theatre industry discussing racism, intersectionality, and diversity.

This interview series deepens Ruby Slippers Theatre’s radically inclusive vision and mission, our commitment to under-represented voices, and complements other concrete actions we are taking to further BIPOC artists voices and to further diversify our own company and our own work.

As part of the series, RST interviews Carmen Aguirre, award-winning actor and author.

Carmen Aguirre is a Chilean-Canadian, award-winning theatre artist and author who has written and co-written over twenty-five plays, including Chile Con Carne, The Refugee Hotel, The Trigger, Blue Box, Broken Tailbone, and Anywhere But Here, as well as the #1international bestseller Something Fierce: Memoirs of a Revolutionary Daughter (winner of CBC Canada Reads 2012), and its bestselling sequel, Mexican Hooker #1 and My Other Roles Since the Revolution. She is currently writing an adaptation of Euripides’ Medea for Vancouver’s Rumble Theatre, Moliere’s The Learned Ladies for Toronto’s Factory Theatre, a short digital piece for Ontario’s Stratford Festival entitled Floating Life, and an untitled play on the life of famed twentieth-century Italian photographer and revolutionary Tina Modotti for Vancouver’s Electric Company Theatre. Reframed, an outdoor performance piece about online discourse, conceived and co-created with The Electric Company, received its world premiere on October 7th, 2020, in Vancouver, commissioned by Ottawa’s National Arts Centre for its Grand Acts of Theatre initiative. Carmen is a Core Artist at Electric Company Theatre, a co-founding member of the Canadian Latinx Theatre Artist Coalition (CALTAC), and has over eighty film, TV, and stage acting credits, including her award-winning lead role in the Canadian premiere of Stephen Adley Guirgis’ The Motherfucker with the Hat, and her Leo-nominated lead performance in the independent feature film Bella Ciao!. She looks forward to starring in Cecilia Araneda’s stunning debut feature film, Intersection, to be shot in Winnipeg in Spring 2021. Carmen is a graduate of Studio 58. 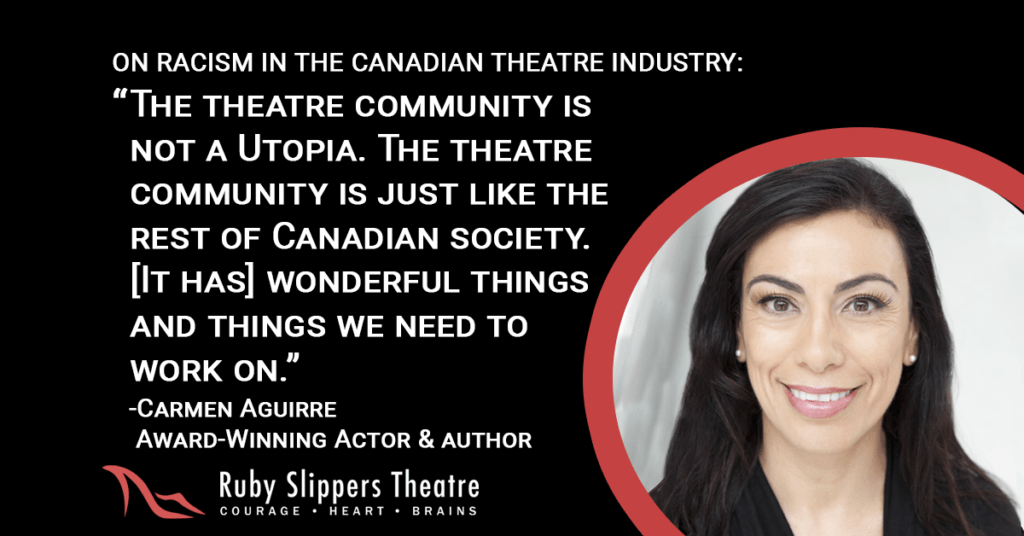 Multi-award-winning Vancouver-based Ruby Slippers Theatre imagines a world where diversity is celebrated through a deeper understanding of each other. To bring this vision to reality, Ruby Slippers Theatre illuminates underrepresented perspectives and inspires independent critical thought by giving voice to diverse, female-identifying artists and by premiering significant Québec works in English translation on the West Coast of Canada.

RST acknowledges that we are uninvited guests on the stolen lands of the Coast Salish People, the xʷməθkʷəy̓əm (Musqueam), Sḵwxwú7mesh (Squamish) and səl̓ílwətaʔɬ (Tsleil-Waututh) First Nations. We are committed to working in solidarity with people who identify as Black, Indigenous, or person of colour as accomplices in not only shifting the colonial default, but dismantling the white supremacist patriarchy.