Home » About Ruby Slippers Theatre » Staff and Board » Nyla Carpentier 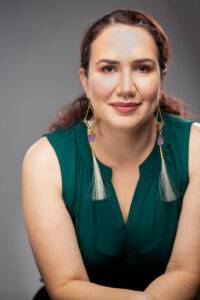 Artist in Residence and Curator for Advance Theatre 2021

Nyla Carpentier (Tahltan, Kaska, French and Scottish), is a multifaceted artist. She was the Assistant Director on Hardline Productions’ Redpatch in 2016 and 2017; she directed May’s Rock at Here Be Monsters, Rattlesnake Run at Walking Fish, Variations on the Death of Trotsky; and co-directed SPAWN at the rEvolver Festival. In the fall of 2013, she debuted her first one act play 21st Century Tricksters at the Vancouver Fringe Festival, and in 2014 she created a powwow-based dance piece Equating Echoes with musician David Newberry for Brief Encounters 21. As an actor she’s toured in Axis Theatre’s Raven meets the Monkey King; in 2017 she performed in both the English and French version of The Flats/Les Flats with Prairie Theatre Exchange and Theatre Cercle Moliere; The Berlin Blues and Ipperwash at the Blyth Festival, Busted Up: A Yukon Story with Openpit Theatre and Casterlereigh’s production of God’s Lake. Also a powwow dancer, she started to dance at the Odawa Powwow in her hometown of Ottawa, Ontario. Now with over 30 years of experience she teaches the various powwow styles, sharing the dance steps and the history. In 2011, in partnership with Raven Spirit Dance Company, Nyla started the popular Powwow Bootcamp. Nyla premiered her new solo show Dissection of a modern day…Mixed Heritage Woman at the 2019 Victoria and Vancouver Fringe Festival. Drawing on her experience as someone of mixed heritage, her goal is to blend the past, present and create new works for the future.