Home » About Ruby Slippers Theatre » Staff and Board » Jessica Hood 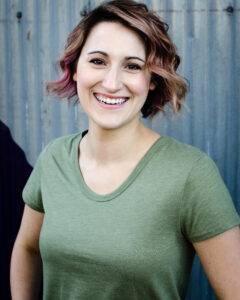 RST is thrilled to welcome Jessica Hood as our Artist in Residence for the 2019/20 season! Jessica will participate in creative and administrative challenges this season under the guidance and mentorship of Diane Brown and RST board and staff. Welcome to Jessica!

Based in Vancouver on the ancestral and unceded lands of the xʷməθkwəy̓əm (Musqueam), Skwxwú7mesh (Squamish), and Səl̓ílwətaɬ (Tseil-Waututh) peoples, Jessica Hood is a performer, producer, and playwright. She holds a BFA in theatre performance from Simon Fraser University and has completed the Stella Adler summer acting conservatory program in New York. For their 2017/18 season, Jessica was the Artistic Associate at Rumble Theatre, where she received mentorship from Stephen Drover, Kellee Ngan, Laura Efron, and Christie Watson. Jessica is the co-founder and co-artistic producer of unladylike co., which aims to produce female-driven work. Since its inception in 2018, unladylike co. has produced The [Organization] a site-specific play by Rachelle Miguel and those whom fortune favours a devised adaptation of Sleeping Beauty for the newest iteration of HIVE 2019 presented at Magnetic North Festival. Selected performance credits include Her/Them (Pedro Chamale, Pull Fest VII); Acceleration (Ulla Laidlaw); The Girl Who Was Raised by Wolverine, (Deneh’Cho Thompson); Voices from Chernobyl, an original production that told the verbatim stories of the survivors, featuring music by Elliot Vaughan (Aliya Griffin, The Troika Collective); and the title role in Olya the Child (Aliya Griffin, The Troika Collective). Jessica was a participant in PTC’s Block A playwriting program led by David Geary. Her play Oh, Romeo/ No, Romeo was selected for the NewMarket National Ten-Minute Play Festival. Her first full-length play, bad eggs, was presented in a staged reading at rEvolver Festival in May 2019. jessicahoodartist.com