No woman ever made history by behaving. 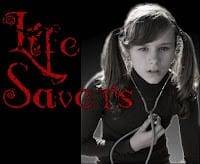 A life-affirming comedy about death.

What the audience said…

“Loved the Stage. Loved the Aunt (in Mom’s the Word as well). Father, mother, sisters, everyone was really really good.
When it comes to live theatre, I always hope and hope that the actors will be convincing, and then second that the story is well-done (I just can’t concentrate on the play, if I don’t buy the performances). But they were all fantastic – nice work everyone!”  – S. Bailey
“It was indeed a fabulous performance! {We} went off to the GI Hotel for a drink and what turned out to be a really deep conversation about our various takes on the “story” – a sign that each of us was profoundly affected by the play. What greater statement is there than that?” –  Brenda Berck
“The play and the production tonight was absolutely fantastic. Your direction was flawless and the ensemble cast stellar. What a perfect night at the theatre! I will most certainly spread the word to my entire acting student base that this is a must see play. Congratulations on twenty years, and have a great run!” – Iris Quinn and Fred Henderson
“Diane’s direction (of the play) was masterful. Please pass on my congratulations to Diane on bringing together one of the most diverse groups of players & roles in a play that had people around me both laughing and crying!!! She did a great job and thank you.” – Allan & Faigie Waisman
Plus these…
“Powerful performances.”
“Bravo to all!”
“Fantastic!”
“Thoroughly impressive.”
“Excellent show.”
Produced with the generous support of The Playhouse Theatre Company
View our Past Seasons of Ruby Slippers Theatre, a Vancouver-based Theatre Company